Recently trending all over social media was this latest look of wavy eyebrows, but we think that the emotion associated with the motion of the ocean is not a positive one. 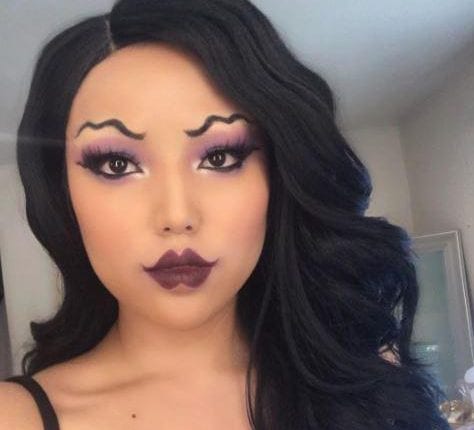 Cat people are frequently associated with those who are less comfortable socially, as they would much rather stay home and spend time with their cats than be social with other human beings. There is nothing wrong with being an introvert – it is a life choice just like being an extrovert is. But there is a fine line between dedicating one’s time to petting your furry, purring friends and shaving off your eyebrows just so you could draw cat cartoons on your face. 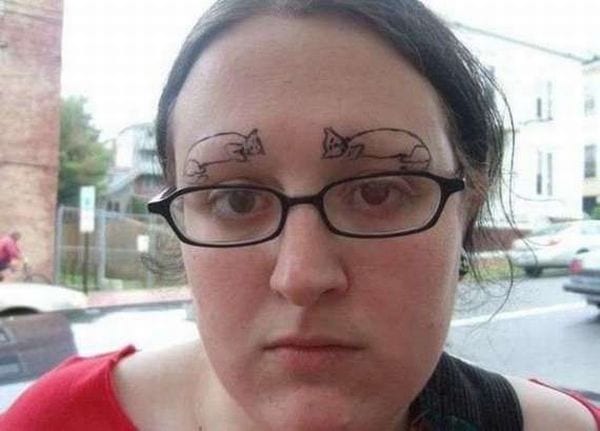 We can’t help but wonder when this guy got the tattoos – it had to have been before he got put behind bars since there is no on-call tattoo artist at jail, but how did he know in advance that he was going to be convicted of whatever crime he was put away for? Was this a certain statement for the jury that made the call and placed a ‘guilty’ label on him, or for the other prisoners in jail, so that they know he was ‘wrongfully convicted’? 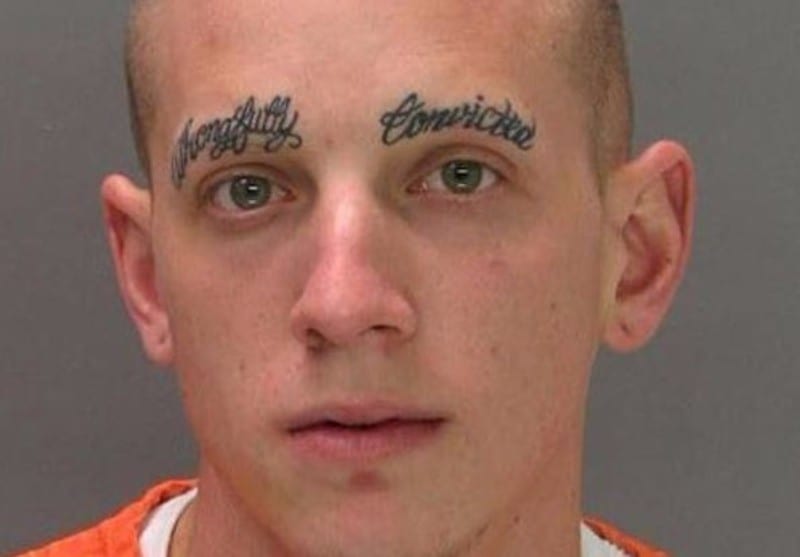 Just Don’t Do It

Those who love working out don’t see it yet another way to pass the time, but rather a way of life. Healthy living usually consists of keeping to a strict diet made of mostly vegetables and foods that are low in fat, in addition to building up a physical routine that will build muscle. However, the girl in the picture below took things to a whole new level by drawing the Nike brand logo on her face. Dedication is key, but it doesn’t have to go this far. 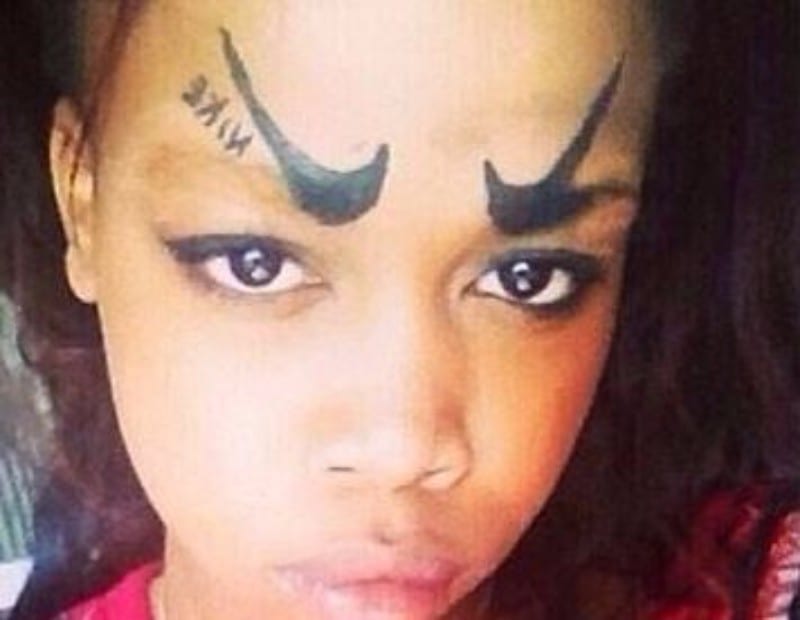 This girl did not feel as though she was getting much out of her dynamic duo brows, so she went ahead and added yet another brow to the mix. We would like to give the girl credit for drawing on the third eyebrow in a way that is highly accurate and finely shaped, but we would probably have to do a double take when coming across her face, regardless of how well-drawn it is. At least she seems happy with it! 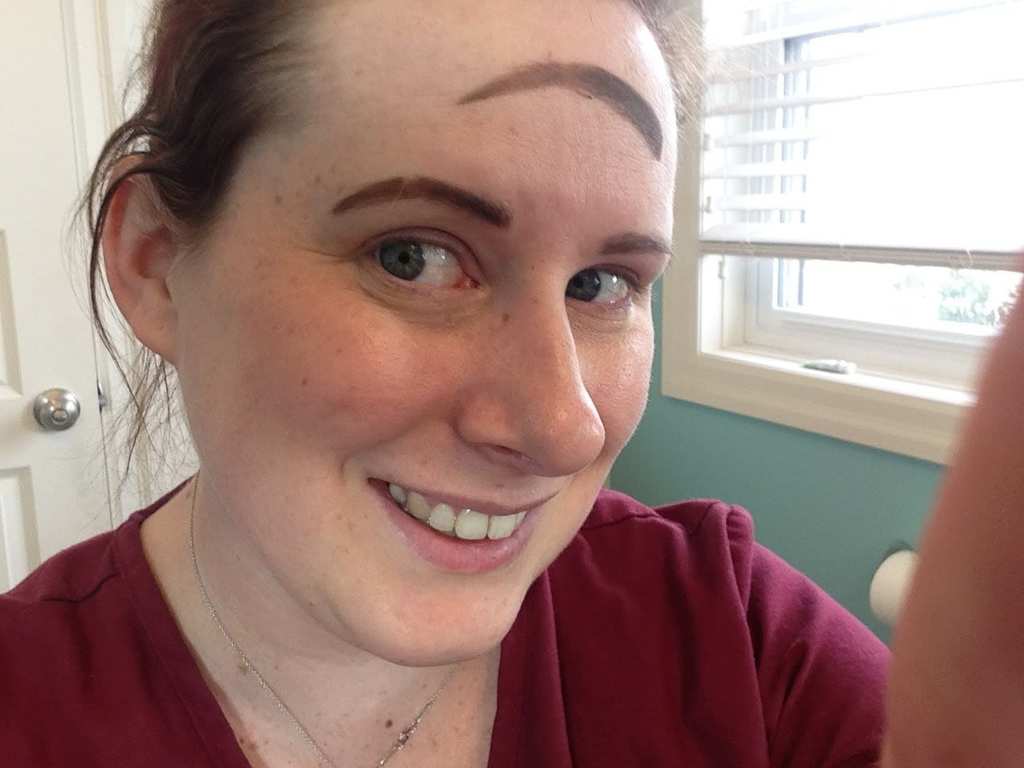 We are unsure if this lady was surprised to have her picture taken or if this is genuinely the way she applies her daily makeup, but it looks like a hard task, having to paint over her eyebrows every day and redraw them a few inches higher. Perhaps she feels as though her forehead is too big or that her hairline is drawn upwards too much, but either way, repositioning your entire face with makeup is a pretty extreme way to go. 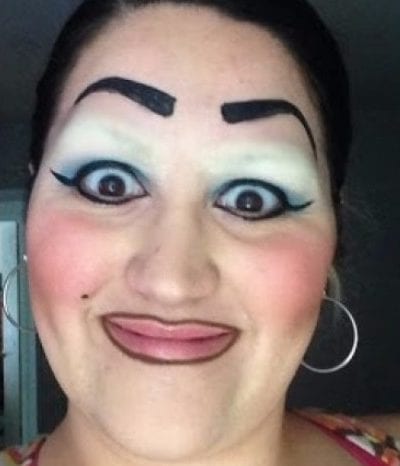 The girl in the picture below could have had a serious case of Monday blues and decided to fight fire with water. Instead of having a grumpy attitude all day long, she decided to draw rainbows on her face. That way, not only would she bring color into other people’s lives, but looking in the mirror would guarantee a smile be put on her face. Still, maybe she could have gone artsy without having to shave off her brows. 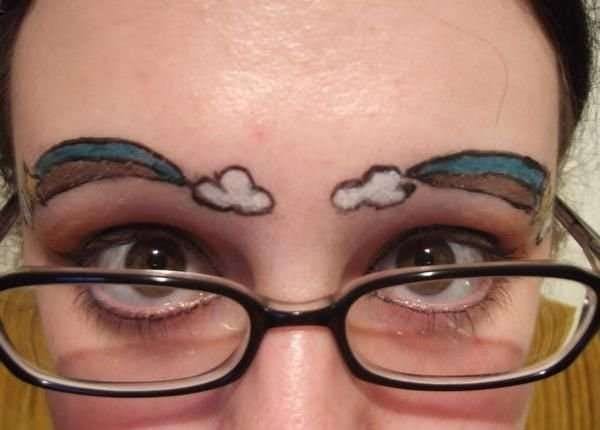 Some might like their eyebrows thin, some might like them fuller and long, but the woman in the picture below likes it one-sided, which is something hard to come by. Maybe she tried to pluck an eyebrow so that it would mirror the other one, but became so frustrated with the imperfection that she ended up plucking it all out. Another possible reason for this bizarre look is that she was using her brows as a metaphor for the imbalance in her life. 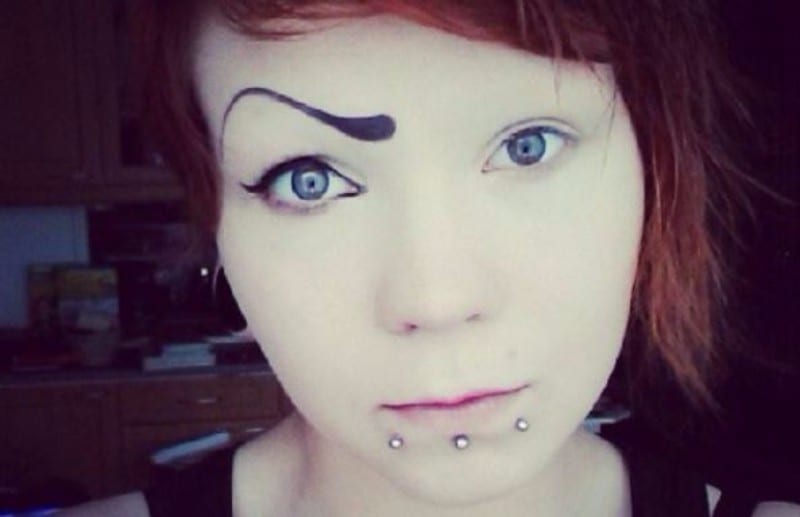 The young man in the picture below wanted to show his impressive hair growth capabilities in a way that would never make anyone question him again, so he came up with a creative way to do so. By connecting his eyebrows to the hair on his head, he was sure women would be flocking toward him uncontrollably, but was severely disappointed when he came to the sudden realization that there is a reason facial hair and normal hair are referred to using different terms. 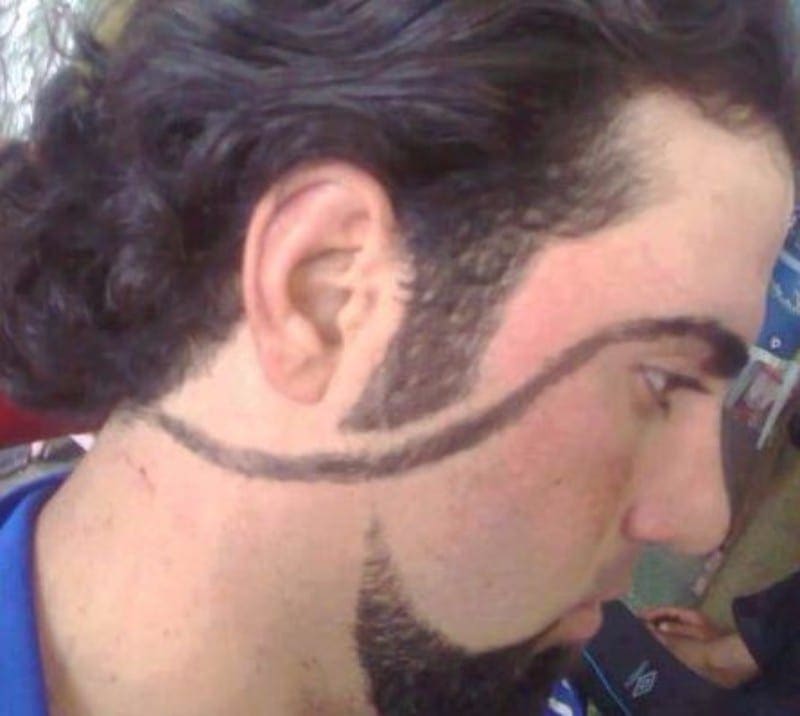 Spring brings out the birds and blossoming trees after seemingly endless months of temperatures dropping and rainy weather. The warm sunshine re-entering our lives is definitely cause for celebration, but that does not mean we would voluntarily wax off our eyebrows and draw flowers in their place as a form of festivity. This woman, however, was not going to let something like other people’s opinion of her get in the way of her marking her favorite season on her body. 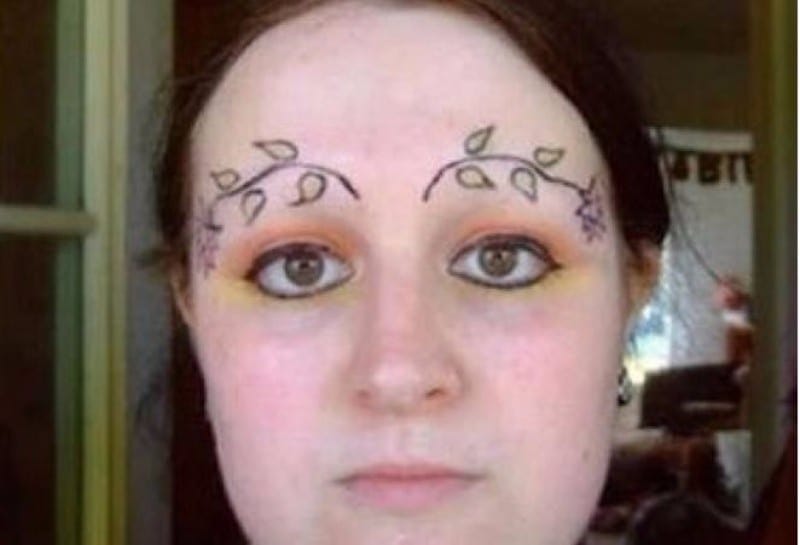 This could either be a horrible allergic reaction to an unknown substance the poor girl smeared on her brows the night before, or it could be a waxing job gone terribly wrong. Either way, it does not seem as though the girl is enjoying the outcome of her brows. If anything, our guess is that she is in agony from whatever made her face swell up like that, and heavily regrets her decision to mess with her face. 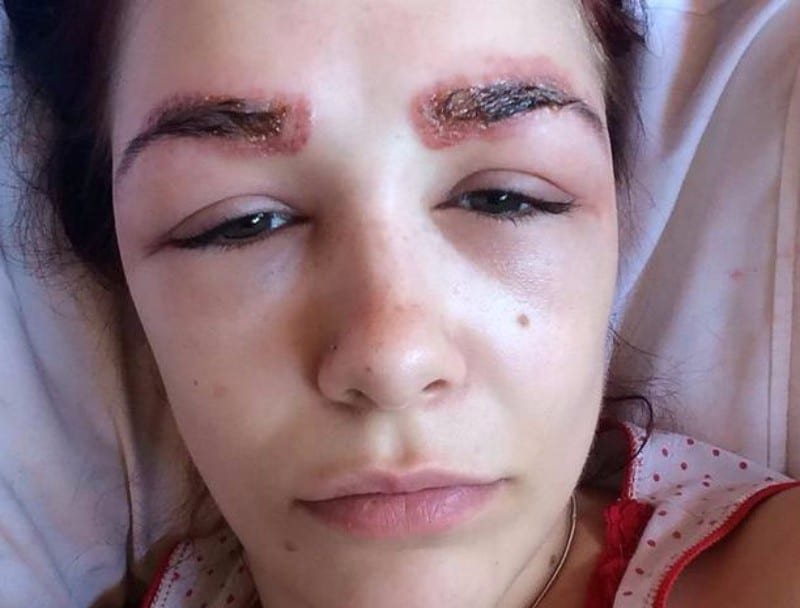 Following the reality TV show Keeping Up With The Kardashians has caused many teens to try to mimic the infamous family and their beauty looks. It is a well-known fact that the E! channel family takes pride in contouring their face with heavy makeup and do not stop at plastic surgery to accomplish a perfected overall look. This girl tried to achieve the same outcome but ended up looking more like an Oompa Loompa than a Kardashian. 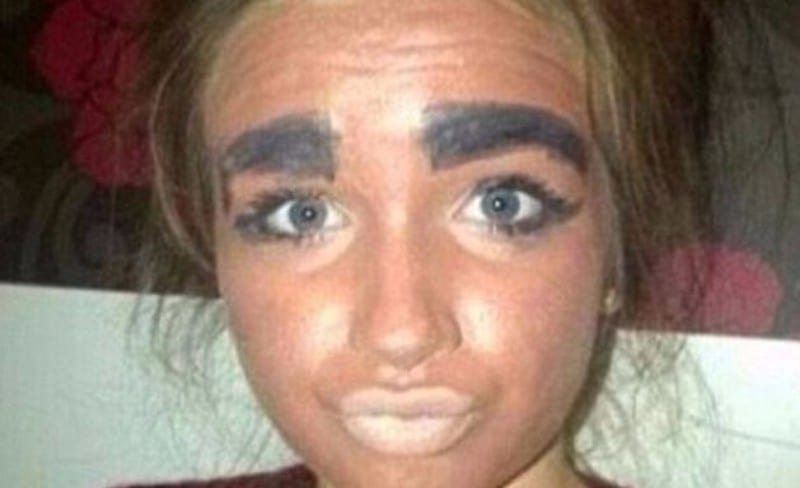 It is a good thing the sweet girl can keep a girl on her face in spite of the fact her eyebrows seem to have gotten into a fight and cannot bear to be near each other. This could have also been due to a razor incident that went horribly wrong, as some stylists do use shaving as a method to shape eyebrows and remove stray hairs surrounding them. It’s a good thing she could just let her brows grow out. 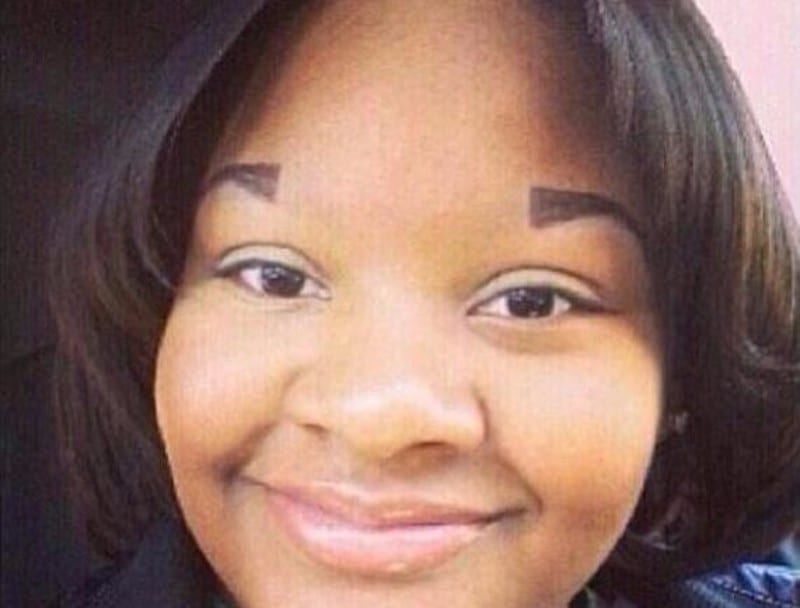 Quite the opposite from the previous picture, this woman wanted to feel as though everything in her life was coming together, so she made sure to draw on eyebrows that went almost close enough to touch, but still managed a thin gap. The drawn brows could have been for a special occasion, like a wedding, in which she wanted the hairs above her eyes to signify the unification of two things into one. We might not understand the art, but we sure appreciate it. 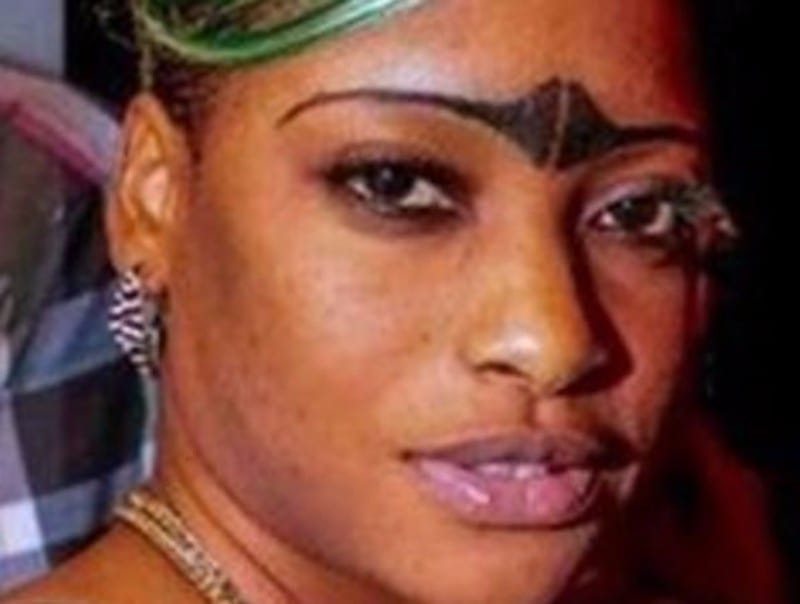 No, Spock of Star Trek did not land a role in The Office, however glorious and funny that may sound. We would 100% tune in to see that long-awaited episode, but until producers of both ends decide to make that happen, we can take comfort in this picture of a woman highly resembling the fictional character in the media franchise. It is worth mentioning that the expression on this woman’s face does slightly suggest that in addition to physical similarity, she may have personality traits in common with Spock, too. 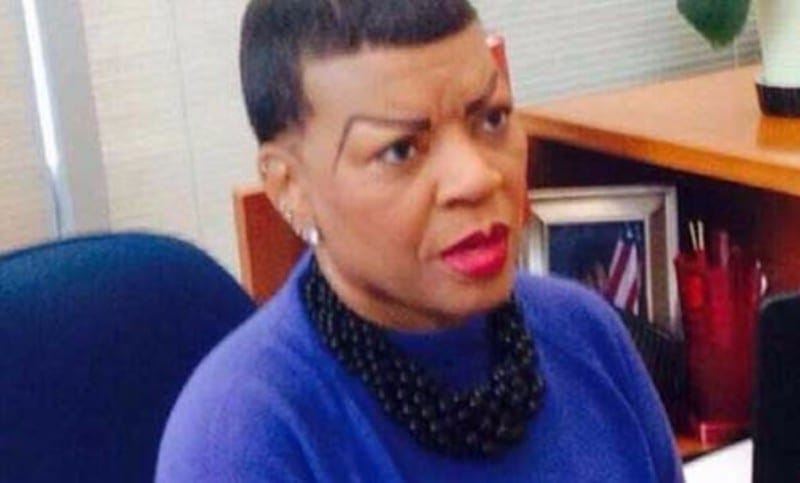 Trick brows are not a thing as far as we know, but the woman in the picture below pulls them off quite well! It is hard to distinguish which ones are real and which are not, but this seems to be the agenda behind the bold makeup, so it is safe to say her goal was successfully achieved. Whether she attempt to trick others into thinking she has twice as many eyebrows than the average person or not, she pulled it off. 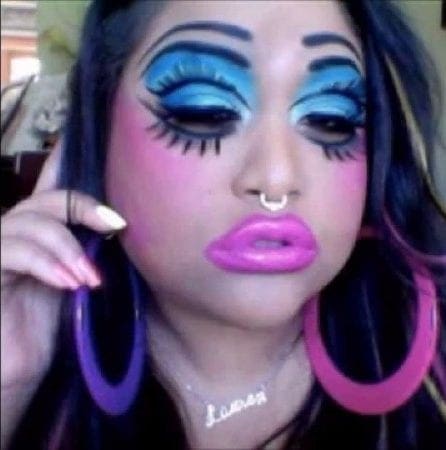 We almost feel it compulsory to say “turn that frown upside down” to those brows, but it seems the eyebrows are not the only features frowning on that face. Granted, her less than enthused facial expression could be due to the fact her beautician messed up the latest eyebrow plucking session the two had. We would not be too thrilled with such an outcome either, but luckily, this girl has other kind features that minimize the effect of the brows. 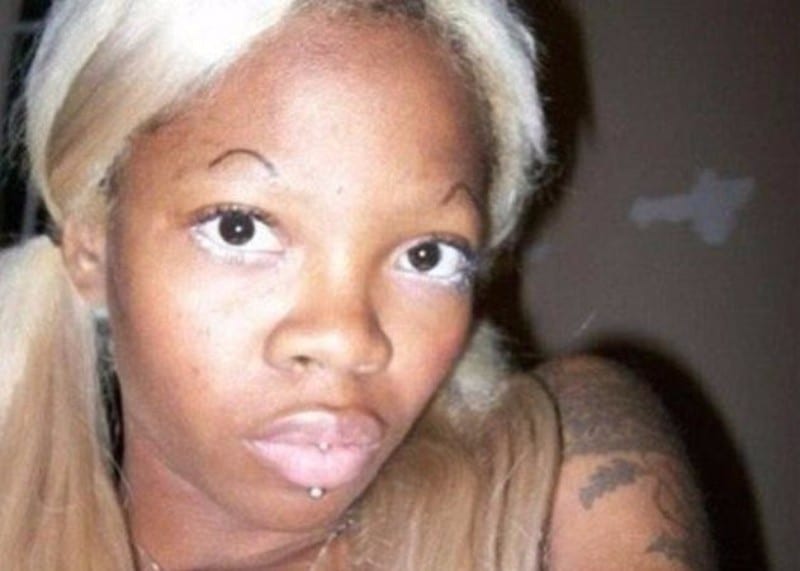 Purrrfect eyebrows are a hard look to achieve. Singer Tinashe once put it best by saying, “The saying that ‘no two things are ever the same’ couldn’t be more appropriate when the topic is eyebrows. I stopped a long time ago trying to make them match.” This girly girl evidently tried to do the same, but did it the wrong way around – instead of trying to make her brows match, she misread the tutorial as to how to pull off the best possible cat-eye. 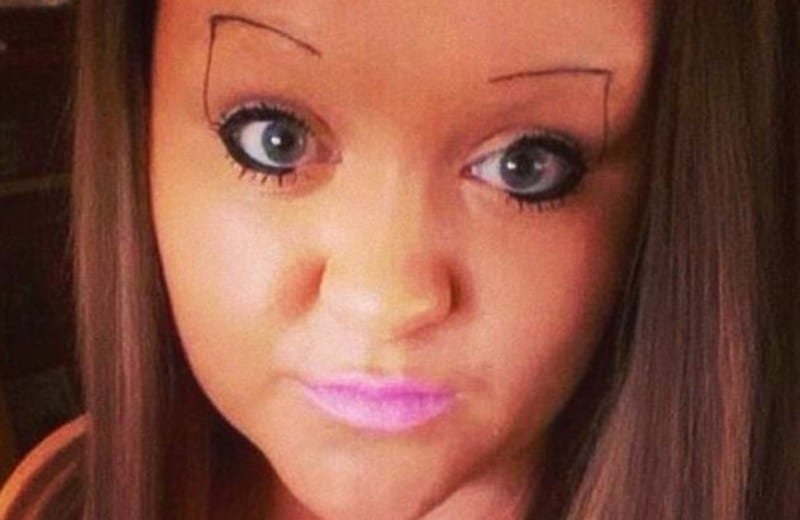 Maybe it is due to the fact this picture was taken at prison as a mugshot, or perhaps it is because of those inward slanted brows, but something tells us the girl in the picture is not too happy about her current status. Call us crazy if you want, but our initial guess is that after becoming incredibly frustrated with the eyebrows she ended up with, this girl went into full rage mode and attacked her beautician. That’s what probably made her end up behind locked bars. 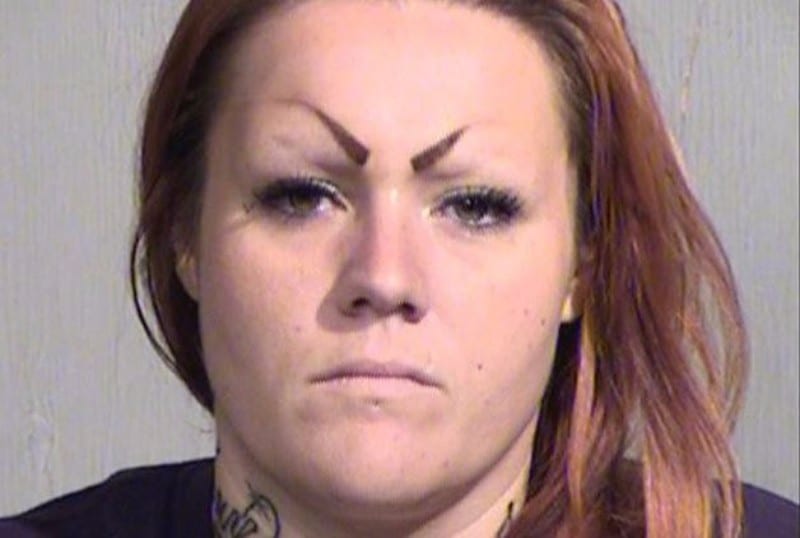 Instead of getting a tattoo reading Jon Kabat-Zinn’s famous quote of “You can’t stop the waves, but you can learn to surf,” this girl decided to express her admiration for her newly found hobby in a way that is both less permanent and not as painful. She considered shaping her brows to look like surfboards, but decided waves would be much more feminine and would suit the shape of her face better, too. This was the outcome, and she seems pretty pleased with it! 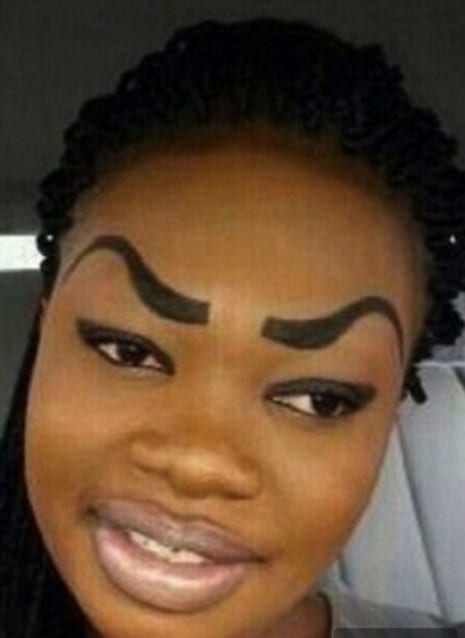 Going on YouTube for eyebrow tutorials may have seemed like a good idea at the time, but maybe this deep purple eye shadowed beauty should have thought twice before drawing in brows that resemble caterpillars, as the look does not really suit her facial features. Big, bold brows are the latest trend in fashion these days, but not every beauty trend needs to be followed. It’s a good thing this quirky look can be fixed with a quick swab of makeup remover. 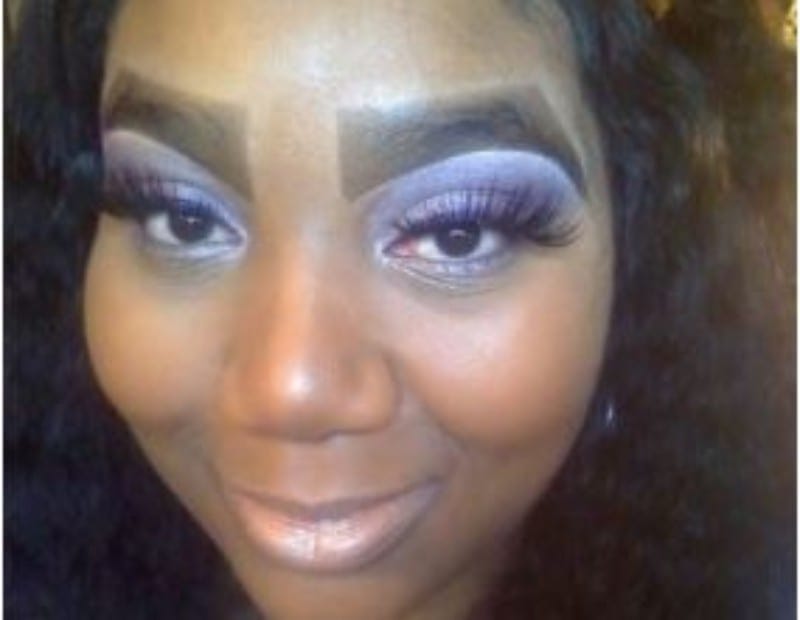 Currently, children as young as 12 to 13 years old can get married off under Virginian law, but ...

In spite of chatter from the executive branch, Congressional Democrats announced a bipartisan ...