Mike Izzard is a 45-year-old postman with a huge heart. He has been voluntarily renovating and reviving a disused rail station in Hertfordshire for the past three years.

One day, while he was planting daffodil bulbs, he dug up a halfpenny coin. He kept digging and soon found an old leather bag, more coins, and a key. 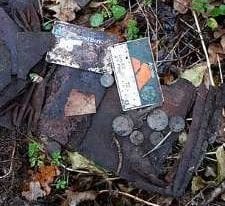 Upon removing the contents from the bag, Izzard discovered an Access card dated 1979-1981, and an old Midland Bank Check, both bearing the name Angela Dimond.

Mike Izzard soon posted pictures of his find to social media and found that the owner still lived in the area, less than two miles away from where he found the bag. He was able to contact her and return it the same day.

The day of the find Izzard had been planting daffodil bulbs beside a bench in Nast Hyde Halt station, which is on a cycling path. ”It’s like something from a movie script, it’s just bizarre, not only to locate her but to hand it back on the same day, that’s just incredible! I could have put that spade in anywhere, so the odds are just unimaginable, ” Mike said.

Angela Dimond, a 63-year-old university librarian from Hatfield, was equally shocked, if not more. She had last seen the purse in 1980 when she was 25 years old. She had been mugged close to the former station. Angela recalls the day she was assaulted, ”’I just got to near the bridge on the Alban Way, and somebody came out of the bushes, snatched my bag and ran off with it.” The robbery was reported, but the culprit was never caught. 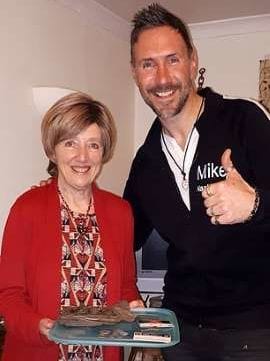 Angela Dimond says that she has avoided the area since the robbery, but she will go see Mike Izzard’s renovations.

Mike won’t soon forget the exciting find. ”She invited me round for a cup of tea, and I gave her the goods… We had a lovely chat. These sorts of things live with you forever.”

One real-life hero, Chris Van Dorn, 27, has made it his mission to rescue shelter animals from ...