As part of his last foreign tour, the outgoing United States Secretary of State took a trip to Vietnam. John Kerry made a powerful visit to the same place in Mekong Delta where years ago he was once ambushed during the Vietnam War. He met with and shook hands with Vo Ban Tam, former member of the Viet Cong and now a crab and shrimp farmer. Kerry admitted that it was surreal to go back to the place where he once shot and killed a man during his time as a United States Navy lieutenant. He tweeted frequently throughout his trip. 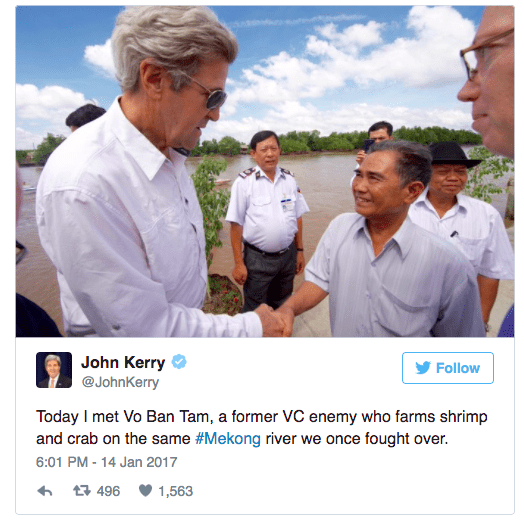 In fact, John Kerry received some information about the very man he shot back then, as he did not know his identity throughout all these years. Tam, who is now 70 years old, told Kerry that the soldier was named Ba Thanh, 24 at the time, and was a “good soldier.” He was shooting at U.S. soldiers while operating a rocket launcher when Kerry, then 26, shot at him after leaping ashore.

The war between South and North Vietnam went on from 1955 through 1975, with the U.S. supporting its ally, South Vietnam. The war claimed between 1.2-4 million lives, of which 58,000 were Americans.

When Kerry returned from the war, he was given the U.S. Army’s Silver Star for bravery, among other honor of service. However, when Kerry cam back from the way in 1969, he became an anti-war activist. When he ran for president in 2004, the shooting often came up and he received much criticism for it. His bid for presidency was ultimately unsuccessful, losing to George W. Bush. When

Kerry spoke with news agency AFP he described his experience during the trip: “It impressed on me the notion that you really need to analyze and understand what lies underneath the slogans.” This will be his last trip as the secretary of state, as President-elect Donald Trump will be inaugurated on January 20th as the 45th president. 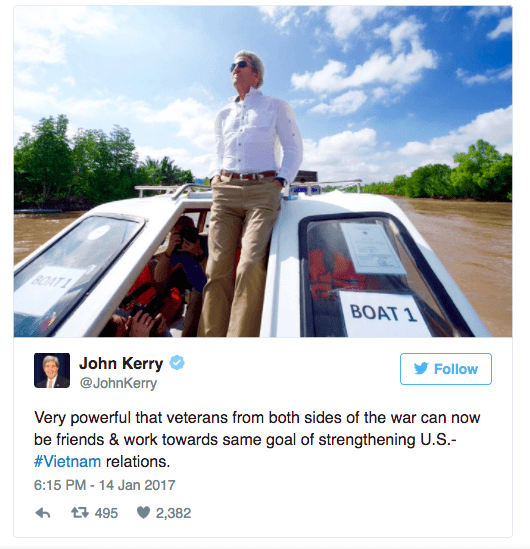 The Best Cough Remedies For Your Cold

Not only can winter be gloomy and grey, but it always seems to come with a never-ending cycle of ...

James Murdoch announced he intends on donating $1 million to the Anti-Defamation League (ADL), ...

Jimmy Carter Makes Solar Farm To Power Half His City

America's 39th President, the remarkable Jimmy Carter, is not one to slack off simply because he is ...