Each year, we commemorate and celebrate Martin Luther King Jr.’s life on the third Monday of January, which usually falls close to his birthday, January 15th. MLK Jr. was one of the most important voices of the Civil Rights Movement, preaching for nonviolent activism against racial discrimination in the state and federal law. He was sadly assassinated in 1968, and soon after a campaign was started in order to honor him with a federal holiday. Ronald Reagan signed the law creating the holiday when he was president in 1983. It was officially observed three years later in 1986. The first time the holiday was observed by every single state was in the year 2000.

This year, man prominent celebrities helped honor his legacy and contributions towards social justice and fight to racial inequality by tweeting quotes of his or simply posting a tribute tweet on Twitter and Instagram.

Josh Gad, who is known for voicing Olaf in animated film Frozen shared an image on Instagram and also tweeted about MLK:

Bill Gates tweeted an article written by his wife, Melina Gates, on how we can honor Martin Luther King Jr. through service and activism: 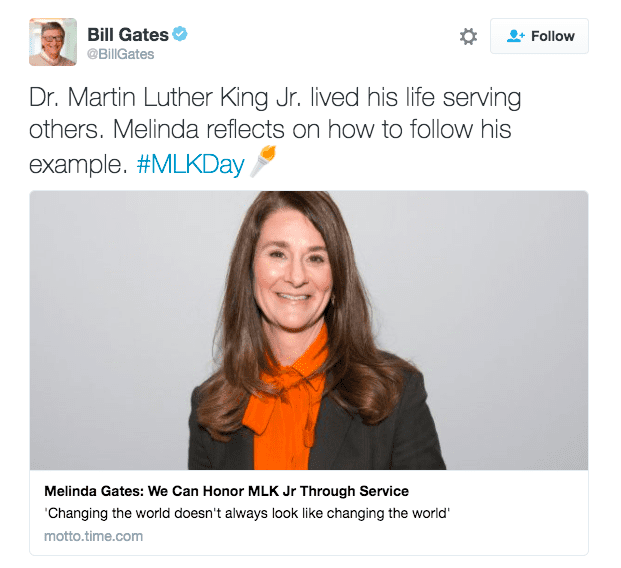 Twitter helped honor Martin Luther King Jr. and helped spread awareness of his activism by activating a hashtag that is dedicated to the late activist leader. Whenever anyone tweeted #MLKDay, it was followed by a symbol of a lit torch. Even though it is a small gesture, it is supportive of one man’s fight for what’s right and helps us pay tribute to him on a bittersweet day when we can reflect how far we’ve come since then but recognize how much work is left to be done in the fight for racial equality.

In a quaint little corner Costa Rica, over a thousand dogs are able to roam free in a designated ...