A restaurant in New York has issued rules for their customers which serves the purpose of combatting the problem of drunk driving.

Peddlers Bar and Bistro, in Clifton Park, New York, has told customers who choose to dine in their restaurant, that the responsible adult at the table will be limited to just one alcoholic drink when accompanied by a child.

This policy has been issued in the hope to serve as a way of ending fatalities amongst drivers who drink under the influence. Their policy reads: “The commitment to end fatalities from drinking and driving requires all of us to participate. Each of us take part in this mission in our own unique way.” 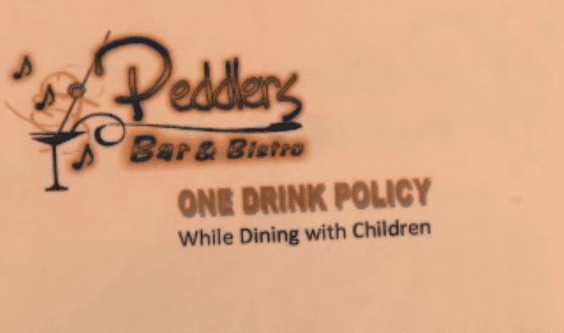 Although this has been a policy that has apparently been around for seven years, it has come into light recently due to social media attention and restaurant manager, Melissa Gravelle, sees this policy as “giving children a voice.” Yet, as is with most rules and policies, there are those who agree with them whilst simultaneously there are those people who disagree with them.

Taking to Twitter, many people have voiced their thoughts on the policy. Some see drinking as their own personal choice and if they want more than one glass, they are entitled to more than one glass. Additionally, one user joked, “You can’t deal with kids at dinner on one drink”.

However, as explained by the restaurant manager, “we’re not picking on parents, it’s just something that we feel in our hearts is something that we can do in order to help.” So while she understands some customers’ frustration towards their denial of more than drink, it does not look like the policy is going to change anytime soon.

Fortunately, many others have also seen the positive from the issue of this policy and support the restaurants decision, stating that parents can also drink at home or, if you don’t like the rules, then don’t go to the restaurant.

Everyone knows how important it is to capture those happy moments in their children's lives. ...

Starting a new family can be an exciting time for many parents. However, heartwarming photos of two ...