You may never think that a helmet made out of paper would be the safest option, but don’t be fooled! Isis Schiffer is a graduate from the Pratt Institute of Design in New York City and the creator of the EcoHelmet. The EcoHelmet is a foldable, paper helmet that can even be recycled. Watch the video below of Schiffer explaining her newest invention.

Most helmets typically seen are made of bulky styrofoam and polystyrene. Often because the traditional helmets are difficult to carry, many bicyclists decide to opt out of wearing the protective gear. Another problem with the average bike helmets is the cost. Bike helmets are not cheap and typically cost upward of $20. The EcoHelmet addresses all of these issues and more.

Isis Schiffer noticed these problems and decided to focus on the most common bike helmet issues. She ended up creating a product that is extremely innovative and useful. Good News Network noted the EcoHelmet’s design and use of a honeycomb pattern “that absorbs force throughout the structure rather than just in one place. It can sustain damage from every angle, but can still be folded up and carried in a purse.” 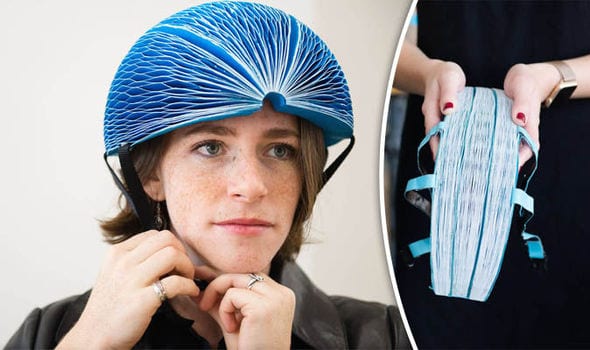 Because Schiffer’s cutting edge design was so original, she received the 2016 James Dyson Award which is described on their website as, “an international design award that celebrates, encourages and inspires the next generation of design engineers.” James Dyson, the British inventor that the award is named after, stated in a press release, “EcoHelmet solves an obvious problem in an incredibly elegant way. But its simplicity belies an impressive amount of research and development. I look forward to seeing EcoHelmets used in bike shares across the world.”

The EcoHelmet plans to launch their product in 2017. You can sign up for their newsletter on http://www.ecohelmet.com/ to get informed on the latest news of the helmet’s release.

I now pronounce you man and...hologram? Yes, as surreal as that sounds, it has become an everyday ...

Especially on a Monday morning, we all need a bit of an energy boost. Whether it's at home, on the ...